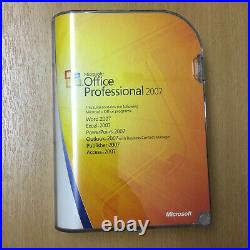 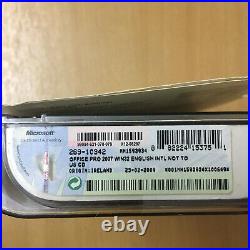 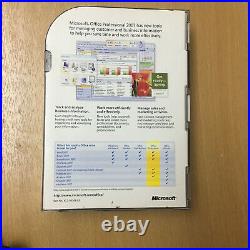 The budget Home and Student Edition is unique in that it can be installed on three computers and includes the note-taking application OneNote. All other versions include Outlook, with the Professional package reviewed here adding the database programs Publisher and Access. The Ultimate suite includes all components, plus tools for team-working and collaboration.

While Office 2003 represented a minor reworking of 2000, Office 2007 is substantially different from previous versions. Microsoft has replaced conventional menu and toolbar navigation with the'ribbon' - a tabbed toolbar that gathers related functions into groups. For the most part it works excellently, but it can be frustrating when the functions you need for one task are split between different tabs. You can't create a custom tab, but a customisable Quick Access Toolbar provides a workaround. Word is one of the most fully featured word processors here, and it's generally very easy to use. There's an advanced word count feature, but a simple version giving the length of a selection and the whole document is displayed at the base of the screen. Word has excellent features for tracking changes and their authors, and lets you insert comments around sections of text; this helps identify the passage to which a comment relates. However, we had to switch off track changes before the software would remove a hyperlink from our test document. Word's default paragraph spacing is at odds with three of the other packages. A single carriage return inserts a 10pt line break, rather than just starting a new line. You can change this, but you need to update Word's templates to stop it happening for each document. Clear Type font smoothing, used by Office applications regardless of the system setting, can also be turned off. The Office ribbon gives Excel a far more modern feel than previous versions. Those familiar with previous releases may have to re-learn their way around the application, but the changes are generally worthwhile. The Formulas tab may offend language purists, but it provides quick drop-down access to Excel's function library and makes it quick and easy to create formulae. A predictive function lists all the valid options as you type - helpful if you're rusty on the correct syntax. PowerPoint is an effective way to create attractive presentations. It contains comprehensive support for graphics, sound and video content, plus many other tricks to help you create clear or eye-catching work.

Annoyingly, you'll need a third-party plug-in to open or save OpenDocument formats, and one from Microsoft to save PDF files and XPS (its own format). In our last review of Office 2007 (Labs, Shopper 247), we had problems opening XPS files under Windows XP, but there were no problems this time. Microsoft says that native support for all these formats will be added in Service Pack 2, due in the first half of 2009.

Office is a comprehensive, powerful suite, but it's not cheap. Table of Microsoft Office 2007 Editions. Office Customization Tool is used to customize the installation of Office 2007 by creating a Windows Installer patch. MSP and replacing the Custom Installation Wizard and Custom Deployment Wizard included in earlier versions of the Office Resource Kit that created a Windows Installer Transform. Please confirm what you required and we would forward price details and related information. (Just off the A41, 2 miles from M1/A5/A41 BrentCross interchange). We only supply equipment sourced from UK distribution which is thus official UK specification product. This includes problems with: compatibility, driver/software conflicts, improper installation, etc. All sales are considered final. We have been caught out only the once and now take precautions that would most certainly involve legal action being taken should you be found guilty of fraud. Don't waste your time or our's. The item "Microsoft Office Professional 2007 Retail Edition" is in sale since Friday, January 10, 2020.

This item is in the category "Computers/Tablets & Networking\Software\Operating Systems". The seller is "snet-technologies" and is located in London. This item can be shipped worldwide.