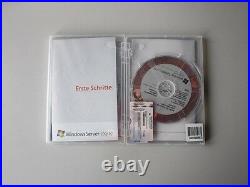 For the first time it is now possible to operate a Windows server without a graphical user interface ("core server") in order to provide only file and infrastructure server functions in a resource-saving manner. Windows 2008 servers are generally multilanguage licensed.

Mainstream support for Windows 2008 (R1 and R2) will not end until January 2015, while extended support will run until at least January 2020. Windows Like the Enterprise Edition, 2008 Datacenter Server R2 supports up to 2 TB RAM and even up to 64 processors (64-bit). The'Virtual Image Use Rights', which are limited to 4 in the Enterprise Edition, are unlimited in the Windows 2008 Datacenter Server R2!

You will get one invoice with designated VAT. This item is in the category "Computers/Tablets & Networking\Software\Operating Systems".

The seller is "2ndsoft" and is located in this country: DE. This item can be shipped to all countries in Europe.